Meigs County was created in 1819 from portions of Gallia and Athens Counties and was named or the fourth governor of the State of Ohio, Return Jonathan Meigs, Jr., who was also served as the fifth United States Post Master General, and as a United States Senator.

In 1848, the first case was heard in the new courthouse, located in Pomeroy. It has the distinction of being the second-oldest courthouse in continuous use in the state. In July 1863, Ohio’s only Civil War battle took place at Buffington Island at Portland. The prisoners of that battle were housed within the courthouse until a gunboat could take them north. In 1877, two wings and an outer front stairwell were added and have remained to what we see today.

In the beginning, coal and salt were what drew people to the county. Now, the numerous music festivals, sternwheel festival, and the many small businesses that dot the county, draw people to our southeast corner of Ohio.

Meigs County has sent many sons and daughters into the service to our country. Those who made the ultimate sacrifice can be found on the memorials throughout our county. There are eight Congressional Medal of Honor recipients from Meigs, five of whom are buried in the county.

As for our future, it’s brighter than ever! The only question is, will it include you!

No better place to spend a Saturday than Meigs💚

Due to technical issues with Facebook’s server,

Join us LIVE on the Meigs County Chamber & Tourism

We've all experienced decisions fatigue. Having a

Did you know that we have the busiest LIVE MUSIC s 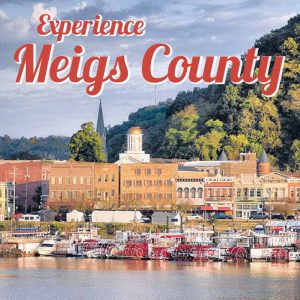 Get Our Visitors Guide